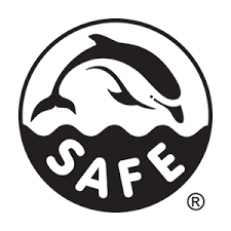 Dolphin-safe labels are used to denote compliance with laws or policies designed to minimize dolphin fatalities during fishing for tuna destined for canning. Some labels impose stricter requirements than others. Dolphin-safe tuna labeling originates in the United States. The term Dolphin Friendly is often used in Europe, and has the same meaning, although in Latin America, the standards for Dolphin Safe/Dolphin Friendly tuna is different than elsewhere. The labels have become increasingly controversial since their introduction, particularly among sustainability groups in the U.S., but this stems from the fact that Dolphin Safe was never meant to be an indication of tuna sustainability. Many U.S. labels that carry dolphin safe label are amongst the least sustainable for oceans, according to Greenpeace's 2017 Shopping Guide.

While the Dolphin Safe label and its standards has legal status in the United States under the Dolphin Protection Consumer Information Act, a part of the US Marine Mammal Protection Act, tuna companies around the world adhere to the standards on a voluntary basis, managed by the non-governmental organization Earth Island Institute, based in Berkeley, CA. The Inter-American Tropical Tuna Commission has promoted an alternative Dolphin Safe label, which requires 100% coverage by independent observers on boats and limits the overall mortality of dolphins in the ocean. This label is mostly used in Latin America.

According to the U.S. Consumers Union, Earth Island and U.S. dolphin safe labels provide no guarantee that dolphins are not harmed during the fishing process because verification is neither universal nor independent. Still, tuna fishing boats and canneries operating under any of the various U.S. labeling standards are subject to surprise inspection and observation. For US import, companies face strict charges of fraud for any violation of the label standards, while Earth Island Institute (EII), an independent environmental organization, verifies the standards are met by more than 700 tuna companies outside the U.S through inspections of canneries, storage units, and audits of fishing logs. Earth Island Institute receives donations from the companies it verifies; and EII has never had an external scientific audit of its labeling program, a best practice for eco-labels. International observers are increasingly part of the Dolphin Safe verification process, being present on virtually purse seine tuna boats in the Eastern Pacific Ocean.